You can invite all your friends and contacts for free to SpicyMatch. Make your list of friends grow and interaction on your profile increase :)

You can book your next stay at Jardin d'Eden directly from your SpicyMatch profile. Click here to request a quotation

You can book your next stay at Jardin de Babylone directly from your SpicyMatch profile. Click here to request a quotation

BE WICKED FOR A WEEK!

N is for Naughtiness - Dr Shelley's A-Z of Sex 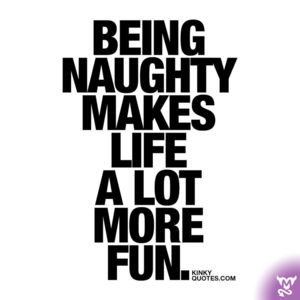 N is for Naughtiness

How naughty are you? How naughty can you be? What naughty things have you been up to?

I was living in Marina del Rey in Los Angeles a few years ago, in a really nice apartment near the beach. I had a girlfriend living with me at the time who was bi, and very fun. The clothes dryer door wouldn’t shut so I had to call up the shop I originally bought it from and get an appliance repair person to come round. He arrived early in the morning and I only had a skimpy robe on. I flirted with him the whole time, letting my robe open slightly so he could see I was naked underneath. He said I had been too hard on the nipple on the door of the dryer and that I had banged it too hard! Well of course with that type of language how could I resist! I called out to my girlfriend who was upstairs and told her to come down. I said to her incredulously that the repair man said I had been too hard on the nipple. I pulled down her top and sucked on her nipple and asked her if I was too hard… I could tell he was super turned on. I told him to take his cock out and stroke it while I proceeded to show him how I banged my girlfriend. I pushed her down on the floor and he exploded like crazy! Luckily I had a towel handy! Needless to say he gave us a really good deal on the repair job!!!

Recently my ice maker in my fridge stopped working. My girlfriend down the road had an appliance guy visiting her to check her oven so she suggested she bring him down to check on my ice maker. He simply pressed a button and got it cycling and working so said he wouldn’t charge me. So in order to show my appreciation I offered him a blow job!

Sounds like that could be a great job! Appliance repair! I wonder how many naughty housewives are out there? And how many actually follow through on that fantasy? It certainly got my engine running and the repair man was very happy when he left!!!!!!

Next time that opportunity arises take it!!!!! Push your boundaries and make someone’s day!!!!! Be naughty! The person may decline the offer but still you have made their day by suggesting it! And that will probably fuel their sexual energy for their work or for when they get home that day and see their partners!!!!!!

One time in Chicago I was contacted by a guy who had just become a doctor who wanted to live out a fantasy before he started work so that it wouldn’t plague him when he was in practice. He had always wanted for a nurse to join him in seducing a young female patient. Very tabu!!! So I organized for one of the girls that I know who works in the sex field to be the young female “school girl” who pretended to have a sore belly. I was the nurse at the school and I had to take her to the doctor to get checked… He was such a naughty doctor he used his cock down the back of her throat to check her tonsils, and then his fingers to explore inside of her to see if there could be anything inside that could be causing her discomfort…. I loved it! So kinky! And such a safe way to enact out a very naughty fantasy and not get anyone into trouble!!!!

One time I had a request for a “job interview” roleplay where I really wanted the job and would do anything to get it! And I mean anything! This guy was a top business man who always had hot girls interviewing for jobs. He was too scared to do anything with the suggestions some of the people interviewing made but wanted to live out the fantasy in a safe setting. Better than getting a sexual harassment law suit filed against him!

The maid is also a popular fantasy! Perhaps Arnold Schwartzenegger should have employed the services of a sexologist or someone specializing in role plays to enact out his fantasy with the maid!

Another popular fantasy/role play is the sexy housewife doing the dishes in heels and lingerie waiting for her man to come home… or bending down to get something out of the oven while her partner watches her from the dining room table, teasing him with a view of her lingerie or lack of it!

Back in my Hollywood days I had a Harvey Weinstein moment. I was chatted up at a hotel pool by a short little jewish looking guy who claimed to be a movie producer. I was in a hot little bikini and he came up to me and said, “You would be perfect for a role I am casting… why don’t you come up to my room and have a look at the script.” I couldn’t believe my ears…. seriously! I’d heard about the casting couch but here was this totally creepy guy making that type of offer? I couldn’t resist. I told my girlfriend I was heading up to one of the rooms for a bit and that I would be back soon! I was back pretty quickly. I went up the room, he opened the door with a towel around his waist. As the door closed the towel dropped and I gulped!!!! “I was hoping for a bigger part than that!” I said, and turned around and walked out!!!!

One time in New York I met up with a Wall Street banker at his hotel. A very nice old school classic NY hotel. He wanted to meet up in the privacy of his room. I understood why when we got there… he proceeded to take off his pin striped shirt and impeccably ironed shirt to reveal that he had been wearing full women’s lingerei under his suit all day… that was his fetish…

And another time a very good looking Asian man contacted me. He had long hair, rode a motorbike… very sexy guy. He also wanted to meet in the privacy of his hotel room and stripped down to show me his fantasy which was wearing nylons and a garter belt, and heels.

I was invited to do a workshop at a rope bondage week down in Hedonism in Jamaica a while back. My workshop turned out to be a great Segway between the bondage community and the swinger scene of Hedo. The rope community is all about the importance of discussing boundaries and getting consent. Whereas in the swinger community and often at resorts such as Hedo, there are a lot of very friendly people who do not necessarily abide by the basic rules of ask before you touch. Many times there is a gap between wanted and unwanted attention. Especially with a lot of the old school swingers who have been going to Hedo for years and live a very open lifestyle. It’s almost like there are different cultures within the sex scene. Old school swingers, people into tantra, rope bondage people, 50 Shade of Grey types, full on BDSM peeps…. Each has their own language, customs and cultures. It is important to be aware that everyone speaks a different language and to not necessarily be offended by that language but just realize it is different. How to learn a response that is strong but not rude, accepting yet self-empowering.

Allow yourself to be that naughty little boy, or girl, and go out and create some amazing memories for yourself, and others. Encourage each other to be naughty. To do naughty things sexually! Be naughty!!!

Next is O for Orgasm…